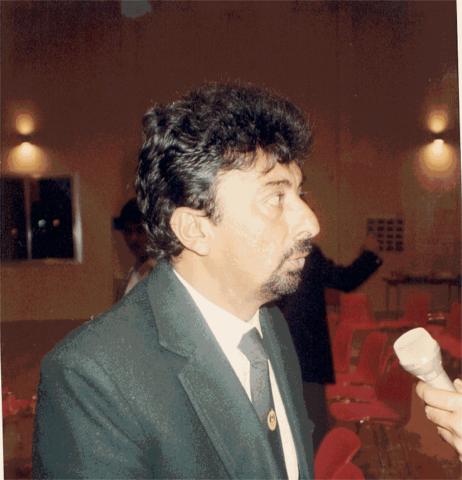 Most of my childhood was spent in the gullies of Zanzibar where initially we used to play those popular street games like marbles (chura, sokodiko), nyage, pita-pit and kidandi followed by tennis ball cricket and soft ball volleyball and football. I was completely obsessed with sports and my career in it began at the tender age of 12 when I represented my primary school, Sir Euan Smith Madressa, in cricket as well as volleyball. It lasted for 38 solid years when eventually in 1995 I hanged my boots. I cherish those days with my collection of photographs, which depict me at different times:

Sadly, sports, which earned me laurel and fame, also usurped my dearest ones. On 26th April 1982, my eldest brother

Yusuf  had suffered a heart attack on the cricket field while participating in the Veteran Cricket Festival and died on the same day. Worse on the fateful, Sunday of 1st November 1992, my son Kazim died in a car accident while on the way to his cricket league game.

Overlooking the cemetery from the balcony of my house and staring at my possession of trophies in the adjacent room I do often give a thought to the inevitable and visualize life as a short span of time that out to come to an end one day. With my life it has been cricket that has taken much of its time right from Zanzibar four decades back when following in the footsteps of my elder brother

Yusuf, I developed and graduated myself to big cricket. Alas Yusuf is no more and incidentally got heart attack right on the ground playing festival cricket and later dying on that same fateful day of 26th April, 1982.

Zanzibar gave way to Daressalaam and with its flourished Union Sports Club. We nurtured it to Champions Club in 1973 and there after it has been ‘UNION’ all the way till 1992.

My obsession with cricket is attributed to Abdulrasul Bhaloo(Datchu) who inspired me to play the game and would even come to my house to fetch me up. Over here

, Yusuf Kabana, Bashir Tejani and Amir Gulamhusein have all been my contemporaries since those old days and we have shared some very pleasant moments. They added lot of confidence in me and I shall always remember them.

Amir Yusuf’s contributions have been immense. I really appreciated his cricketing etiquettes and shrewdness on the field. Imagine his dedication when once immediately after his return from the hospital where he had been admitted and given drips he was made to play a particular game and he proved his worth claiming the highest share of wickets.

I highly respected Yusuf Kabana who had instilled into us the habit of saying our prayers at the grounds. This aspect of ours has been highly appreciated in Kenya, Malawi, Zambia and Zimbabwe and we had set a good example to our fellow Muslim brothers. Yusuf was the finest tactician and won us a tough battle against Dar Cricketers in 1980 when we bundled them out for 68 runs from being 56 for 3 at one stage against our meager score of 92 runs. That game also heralded the brilliance of Sajjad Lakha as the bowler.

Bashir Tejani and I have been childhood friends. In matters of courtesy he is par excellent. He never forgets to compliment a good performer, whichever team one may belong to. One particular thing about him that makes me very sentimental is that he never misses to send me his greetings on my birthday. He commands a very good knowledge of the game and remained our most elegant batsman. We have shared innumerable partnerships but the one that easily comes to my mind is the 117 runs between us against the visiting MCC side in 1982 when we came together at the score of 26 for 5.

Amir Gulamhusein and I have played lot of cricket together. As a bowler I admired him a great deal. He reigned Daressalaam scene for 4 years taking wickets left, right and center. His 7 wickets in a devastating spell against ‘Bohoras’ whom we bowled them out for some only 50 runs is still being remembered. Amir reminds me of his late brother Akber. Akku was a big morale boost and very much attached and dedicated to ‘Union’. Despite him being a great cricketer at one stage he always used to make us feel very big.

So all along it has been cricket. I really loved the game and enjoyed playing it. The different nature of the teams, the happy spirit, the competitiveness of matches, the rejoicing off the field and the celebration thereafter, the meeting of so many good old friends, the warm involvement and appreciation of crowds who come to watch good cricket all contribute to the wonderful time that I have had.

In my long career I must have scored hundreds of fifties but never had the honor of scoring a century even in a friendly match till when I notched one 120 runs not out against Daressalaam Gymkhana with whom we were playing a friendly match. I was very much satisfied with myself on that Sunday in June, 1987.

The A.G.Tarmohamed tournaments have brought to me some everlasting memories. I can still recall the defeat at Lusaka in 1983 we inflicted upon Universal S.C. of Zimbabwe who have always been the contender and till then never lost a game in the tournament I was amongst the runs scoring 75.

Another strong contender for the Tarmohamed trophy had been Universal S.C. Kenya consisting of 6 to 7 Kenya National players. Our last encounter at Lusaka in 1987 proved a very exciting one and eventually we emerged triumphant. It was very good teamwork on our part and we felt really great after the victory.

I had represented the National side for 15 consecutive years since 1972 during which I lead the team for 4yrs. before declaring my retirement in 1986. My proudest moment occurred on Tuesday evening 16th October 1984 in Daressalaam, when the Quadrangular tournament was won by Tanzania under my captaincy after the lapse of 19yrs. I held aloft the Sir Robert Menzes trophy amidst shouting and clapping by spectators who had turned in thousands at the Coast Gymkhana ground. Infact, it was my biggest achievement and I really felt at the top then.

Time had moved very fast but at times it is also pleasant to let nostalgia overcome my other indulgence:-

Lifting Upanga’s Pranlal Divecha for a six in 1973 which clinched Union the league championship for first time since 1954 and heralded their glorious reign, sharing a mammoth partnership of 170 runs with Taher Amijee against Zambia at Nairobi in 1976 of which I contributed 93 in 4 hours 10 minutes at the crease, scoring 55 runs from 27 deliveries against Kinodoni S.C. in 1983, hitting 35 runs off the last two overs against Dar Cricketers including four consecutive boundries of Alnoor Fazel in the Saturday League game in 1984, striking 18 runs off one over from Alnasir Hasham (Illala) in the 1984 Sunday League game against Dar Cricketers, the fastest innings in my career scoring 85 runs unbeaten in 57 balls against Annadil Burhani including 10 sixes in 1987, an unbroken partnership of 102 runs with Shakir Sheralli against Eaglets S.C. who boasted with 8 Kenyan National players in the Super-League finals in 1992 where I contributed 58 runs unbeaten, receiving ‘Best Batsman’ awards at TCA, DCA, TAGT and Union S.C. functions etcetera.

I did the best I could for Union S.C. and Tanzania and I made the best out of whatever I had and above all I am proud to have belonged to the club that has won 18 yrs. in 20 yrs cricket championship in the country. In 1995 after a long spell of 38 yrs. cricket career I hanged my boots at the age of 50 yrs.

Click here to view write up on Yusuf Nathoo

Click here to view write up on Mohamed Nathoo