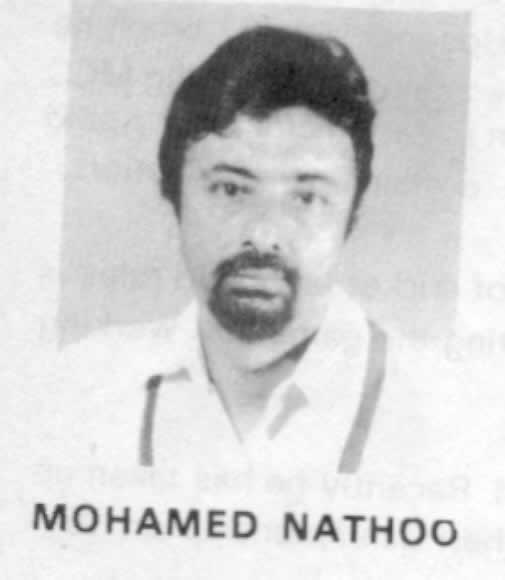 If the communal services of the grand dad, Ali Nathoo, remain unparalleled in the history of Zanzibar, the contributions of the grandson, Mohamed Nathoo, remain unequalled in the history of Union Sports Club. Mohamed reminds me of a lanky boy in white shorts stylishly holding his bat and thrashing tennis ball in the gullies of Zanzibar in the 1950s. The confidence he exuded heralded the coming up of a potential cricketer.

Mohamed is well built athlete. He is a veteran cricketer who along with Shiraz Sumar and Bashir Tejani forms Tanzania’s formidable batting line up. He is a pleasant personality who commands great respect from his contemporaries. It is also his amiability that makes one and all accessible to him.

Mohamed was born on 11thFebruary, 1946 in Zanzibar. His cricket career goes back to his primary school days when he played for ESM in 1958. He represented Ithnashri Gymkhana ‘A’ in 1960.

While in Daressalaam he joined Union Sports Club in 1968 and became a regular member of the National Team since 1972. Mohamed had the honour of captaining the National Team in the Quadrangular played in Zambia in 1977. Presently also he is the captain of the Tanzanian side and had the honour of regaining this year the Quadrangular trophy that had eluded Tanzania for 16 years.

A majestic walk to the wicket foresees an innings that unleashes a series of strokes. It is characteristic of him to constantly consult his partner and also whisk off a patch of ground. His aptitude at running between the wicket forms an amusing part of his stay at the wicket.

Mohamed’s footwork commands different strokes in the game. His effortless drive off the front foot is so fluent that it even receives the applause of the bowler. His beautiful forward movement demonstrates to the onlookers the presence of a master batsman. Any short pitched delivery is hooked onto the fence or lifted out of the ground. The ease with which he handles the spinners is commendable.

The 1982-83 season saw Mohamed scoring more than 600 runs and at one stage he had six consecutive fifties to his credit. He is the first batsman to be awarded the best batsman trophy on its introduction in 1974. Mohamed has played big innings umpteen times but the sad note of his remarkable career has been a century that has always eluded him. He has reached the score of nineties on as many as ten instances but the nearest he reached towards a century was 99 when he was unfortunately run out.

In 1975 the strong Upanga had scored 184 and Union were trailing at 40 for 4. Then came the turning point as Mohamed displayed a superb knock. His unbeaten 68, enabled Union win that vital game. Similarly against the visiting Minor Counties Team in 1982, wickets were tumbling at 26 for 5 when Mohamed and Bashir Tejani came together and shared a sixth wicket partnership of 117. That gave some respectability to Tanzania’s score and Mohamed’s personal contribution was 70 invaluable runs.

Mohamed considers his 38 runs innings against the visiting MCC side in 1980 as a memorable one. It was a strenuous knock against the fierce bowling attack of Bill Merry who plays for Middlesex in the English Counties. It left on his thigh a mark resulting from one hostile delivery that had hit him.

Concentration is one of Mohamed’s biggest virtues. In the 1976 Quadrangular he batted against Zambia for 4 hours 10 minutes scoring 93 runs. He times his innings as the situation demands. When a faster scoring rate is required runs flow from his bat as evidenced last season when off 27 deliveries he scored 55 runs that included 2 sixes and 6 boundaries against Kinondoni, 18 runs off one over from Tanzania’s fast bowler Alnasir Hasham and four consecutive boundaries off Alnoor Fazal, Tanzania’s leading off spin bowler.

In the AG Tarmohamed tournament in Lusaka this year Mohamed hit 75 solid runs against Zimbabwe’s Universal enabling Union its first ever victory against the Zimbabwe team. In fact no other participating team had ever won against Universal since the inception of the Tarmohamed tournament, that was the first defeat inflicted on them.

Mohamed is a pioneer of Union that has reigned supreme over the local scene for almost a decade. Mohamed’s consistency with the bat has been one of Union’s main strength. His exuberant and flamboyant style on the field boosts the morale of his team.

The memory lingers of the drama at the Kinondoni ground when Union in a decisive game against Upanga required just 6 runs to emerge champions. Excitement was high while at the wicket stood the forlorn Mohamed awaiting the delivery from Tanzania’s fastest bowler, Pranlal Diwecha. A leisurely pull from Mohamed dispatched the ball into the spectators’ stand. That six had won Union championship after 19 years.

Mohamed has performed innumerable rescue acts for Union. His wicket is the most difficult to capture and when he is dismissed there is sheer rejoicing by opponents. It is generally felt that as long as Mohamed’s wicket remains Union’s optimism does not fade. When he is out Union’s hope also sinks.

Volleyball is another sports where Mohamed has excelled. His fine smashing game has thrilled the Daressalaam public.