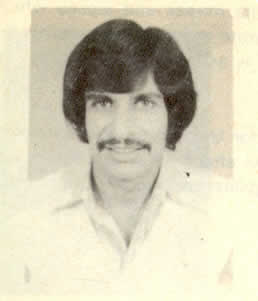 Shakir Sheralli owes his basic gifts of cricket to his fabulous dad, Raza Sheralli, and the incomparable grand dad, Sheralli Meghji. Though he may not command the prowess of the grand dad, the grandeur and innate nobility are encapsulated in the strokes he plays. The affix ndimu to his name links ‘Shaki Ndimu’ so much with the legendry ‘Sheralli Ndege’.

Born on 20th July, 1955 in Zanzibar, Shakir is affable, carefree and the most popular amongst the Union lots. Union supporters love him for his daring feats and aggressive display. Ever since his emergence with Union in 1972 spectator interest has been given a new lease.

In physique Shakir’s structure may reflect fragility but his desire to hit the ball far is met by method different from the others. The grace of his batting is not merely show, a flourish added to please the eye of the spectator. The strokes are wristy, the follow through high and free as by such means maximum force is applied to the ball with minimum strength.

A few of his majestic parades of batting display during his rich harvest of runs include his innings of 95 against Upanga in 1981 and 51 scored off some 8 overs against Coast Gymkhana in 1982. His captain’s knock of 89 against Dar Brotherhood in 1981 remains one of his finest innings. That innings included 2 sixes struck on the off which were peculiar and there was something unusual about them. Approach to such fineness rarely gets witnessed.

Shakir is one of the finest players of fast bowling and the most clinical dispatcher of a delivery. His best shot has to be off the front foot through the covers. His cover drive is dazzling with the motion of the ball accelerating as it speeds towards the boundary. Union supporters rejoice in wonderment at his artistry and imply in their spontaneous prose that in such innings he has no peer.

In the recently concluded Quadrangular tournament in Daressalaam Tanzania were in all sorts of trouble against the Ugandans as 5 of their wickets had fallen in quick succession. It seemed as if God had showered his bliss on the Ugandans with ‘Malcolm Marshall’ in the form of Masoke who seemed unplayable. It was Shakir’s daring display with fours and sixes that eventually steered Tanzania to a remarkable win.

The conspicuous aspect of Shakir’s cricket is his fielding which is excellent. Irrespective of his position in the field his safe pair of hands coupled with acute sharpness, vigilance and judgment saves his team a number of runs and enables the bowler his share of wickets.

Shakir’s fielding is assessed not by the catches he holds but the misses and lapses that bewilder spectators who yield sigh of disbelief. His throws are accurate and on the target. His inclusion in the National Team, the place he has occupied since 1977, is as much for his batting as fielding.

Tears rolled down Shakir’s cheeks after he was run out for 42, just 2 short of victory, against Coast Gymkhana in 1977. Also his insistence to play against the same team in 1981 despite severe malaria and vomiting on the ground amply demonstrates his affection and devotion for Union.