From the Africa Federation Archives 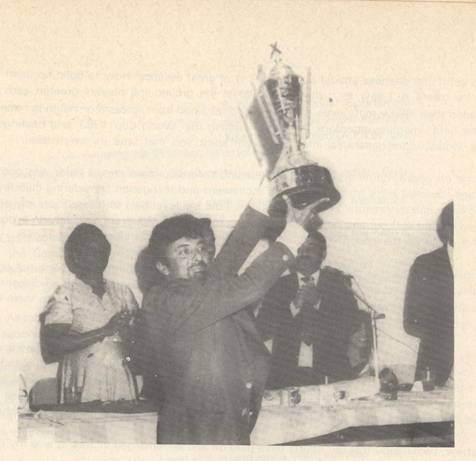 At 5.50 on Tuesday evening, the 16th of October, 1984, Tanzania recorded a historic victory at the Coast Gymkhana ground and regained the ‘Sir Robert Menzes’ trophy after a lapse of 16 years.

As the packed ground was vibrating to the throb of victory chants, the jubilant Tanzanian captain, Mohamed Nathoo, was at the centre of it – eyes flashing, arms high, hugging players and officials, smiling incessantly and gyrating to the shouts as well as hand claps like a hero. It was his moment and he fully deserved it.

Mohamed may have batted unsuccessfully scoring just 43 runs in the tournament, so unusual of him, but he definitely survived with spirit intact to face the future of Tanzania’s cricket. Here below Mohamed talks of his role and the qualities that eventually enabled Tanzania to clinch the ‘Quadrangular’ tournament.

Indeed I feel proud that this prestigious tournament is won by Tanzania after a long period and under my captaincy. I have been representing the National team since 1972 when we played against Nigeria under the captaincy of Bhadru Bhamji. Since then I played under various captains, I myself had the opportunity of captaining the side in 1977 and my experience had revealed a lot to me. When I was entrusted with the task of captaining the side I felt it appropriate to gather analyses of my past experience and prepare myself for the responsibility.

Though the past teams had good players the team lacked unity. Club politics was head and shoulder above the national prestige. It was therefore my turn now to overcome these drawbacks.

Good sprit and unity amidst team mates is of great essence. How to build up team spirit? We have to create it. I saw to it that on arrival at the ground, the players greeted each other, encouraged their fellow mate even if he failed and refrained from sarcasm or insulting remark on and off the field. Imagine underdogs like India winning the ‘World Cup 1983’ and beating the giants West Indies! India generated infectious team spirit and that was its main asset.

Despite playing at home on matting wickets and before our own crowd there was one big disadvantage. Susceptibility of our players to incitement and instigation considering club level politics could have had detrimental effect on the team. I did my level best to disassociate my players from the crowd and sort out any issue in the dressing room itself. We were even having a ‘post mortem’ of the game at the end of the day.

Discipline was another main factor. I had hinted to my colleagues that we were not coming from jungles but matured enough to play as a team of 11 players. Cheeriness and no discontentment to be demonstrated even if one was dropped from the team. Credit must also go to them for rising to the occasion.

Finally it is felt by some people that our competitors were not strong. Uganda’s batting has always been suspect. But this was their best fielding side in recent years. Malawi fielded their best team. I have been playing for years and I consider this Malawi team better than the previous ones. It was more balanced than even our team. Zambia may have brought newcomers but these youngsters were not ordinary ones, they have been performing really well in the local matches.

Anyhow, I am happy that my efforts have paid off and we emerged victors it was my dream come true.

Mohammed Nathoo served as Vice Chairman of Dar-es-Salaam Jamaat for 2 terms from July 2004 to February 2010, when he took over as Chairman till July 2010, following the election of Anwer bhai Dharamsi as Africa Federation Chairman.

He is a recipient of the Africa Federation ABBASI Medal for his achievements in the field of sports.

Any suggestions/comments can be sent to archives@africafederation.org