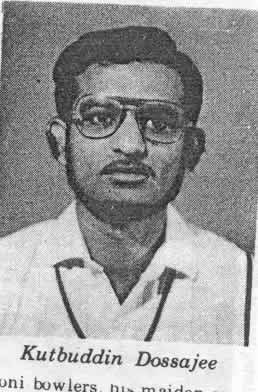 The Sunday knockout final between Coast Gymkhana and Union Sports Club had all the intensity of a thriller. It was an unusual passionate knock of 62 from Kutbuddin that had the dominant Union at last succumb to Coast Gymkhana. As the jubilant Coast supporters lifted their hero shoulder high, Kutbuddin offered a clear mirror reflecting sharply some of his bright images.

The noble soul of Kutbuddin has sincerely served Coast Gymkhana for years. In his very first innings for the club in 1974 against Dar Cricketers Kutbuddin registered 27 runs. That game was the final of the Sunday Knockout and Kutbuddin’s invaluable innings besides holding three vital catches contributed to Coast’s eventual victory.

There is a tendency among Coast supporters to lament the departure of Taher Amijee who had been a real force to their team but then Coast could boast of so many other good cricketers. In that context Kutbuddin’s contributions remain unequalled. He has scored more runs than any other player who has represented Coast Gymkhana. He has every now and then single handedly saved his team from defeat and would steer it to victory when they were down in the dumps. Kutbuddin has thus raised Coat Gymkhana to the level of respectability.

Kutbuddin Gulamhusain Dossaji was born on 12th October, 1952 in a remote town of Mikese in the Morogoro region of Tanzania. A stocky and bespectacled right hander, Kutbuddin is modest and amiable. His fast walk to the wicket is an ample evidence of his confidence and determination. His interesting mannerism is stretching his arms in disapproval of an appeal against him by a bowler or fielders.

Kutbuddin learnt his cricket in Tanga where he received coaching from Tanganyika’s stalwart cricketer Nazir Husain. He started playing for ‘Tayabali Sachak Primary School’ at the age of 12. In 1968 he represented Tanga Combine. In 1970 he captained ‘Popatlal Secondary School’ contesting the ‘Isherwood Cup’ and got selected to represent the Tanzanian School Side that competed in Uganda. He also represented ‘Sir Tayabali Karimjee Gymkhana’ in Tanga.

On Kutbuddin’s arrival in Daressalaam in 1971 he joined ‘Amigos xi’. While with Coast Gymkhana Moez Noordin and Taher Amijee were quite helpful to him and his batting skills improved a lot. He started scoring freely and gained immediate recognition. Soon in 1975 Kutbuddin found himself in the National Side.

Against the formidable bowling attack of Zambia in the 1978 Quadrangular at Ndola Kutbuddin scored 29 not out in the first innings and then in the second innings went on to score 75, and that too unbeaten. That was a vital knock for it saved Tanzania from defeat.

It was again in Ndola against Malawi in 1980 when Tanzania was dragging at 120 for 4 in the 40th over, Kutbuddin came in to its rescue tearing apart the bowling attack and scoring a half century in mere 30 half an hour.

Kutbuddin has always been a consistent run scorer. From 1979 onwards he has scored every season 500 runs and more. This season itself he has registered more than 700 runs including a century against Kinondoni, his maiden century. This was a sweet revenge considering his dismissal for 99 against the same team last season.

Kutbuddin occupies crease to score runs. His arrival at the wicket keeps the score board moving. Once he gets going, excitement among spectators runs high. The ball keeps running towards the boundary line and often gets hit out of the ground. His sixes are distinctive as he whacks the ball with ruthless efficiency. Very few local cricketers can hit the ball harder than Kutbuddin, whether off his back foot or front foot. The power that he generates from his easy pick up is tremendous.

Kutbuddin has never had a truly settled and effective partner. If only Coast Gymkhana has a couple of more players of Kutbuddin’s caliber things would be different for them. It was therefore not surprising when Shabbir Kaderbhai pairing with Kutbuddin rose to the occasion and the pair outclassed the remaining pairs from other teams. They duly won the ‘Double Wicket Championship’ contested last year.

This is no exaggeration but Kutbuddin must have hit no less than 100 sixes in the official games. The press has appropriately labeled him ‘Mr. Sixer’